When we think about the ocean, our first reflex might be to imagine the blue of a paradise tropical island or massive waves hitting remote cliffs on a stormy night. The most adventurous may think about submarines exploring the deep ocean and rovers sampling underwater volcanoes. There is something extremely fascinating that sits right “in the middle” of these two worlds and that is largely unexplored. The so-called mesopelagic extends between depths of 200 and 1,000 m below the ocean surface, between the daily lit epipelagic, where famous sea-life such as phytoplankton and dolphins live, and the dark bathypelagic, where no sun light penetrates.

The mesopelagic is also called the “ocean twilight zone” because it is located between the epipelagic ocean, closer to the ocean surface and the deep sea, that is never reached by the light. (Credit: Wikipedia/Creative Common)

Being far from the ocean surface, where photosynthesis empowers epipelagic ecosystems, one would expect the mesopelagic to be relatively empty. Instead, sonar operators and scientists found out that the mesopelagic hosts an extremely rich ecosystem, so dense in life that layers of fish and zooplankton [planktonic animals that include small crustaceans (including krill), jelly-like organisms, arrow worms that feed mainly on phytoplankton] can foul sonars creating the illusion of a false bottom! Recent studies estimate that the mesopelagic is likely to host about 10^9 tons (yes, it’s 10 with other 8 zeros behind it) of fishes, without counting crustaceans, squids and other animals that inhabit the so-called deep scattering layer.

To make things even more mysterious, part of the organisms that create the deep scattering layer migrate every sunset from the deep sea to the epipelagic, where they are thought to feed on phytoplankton and are eaten by a range of ocean predators. (Some predators actually feed on them also during the day, by performing extremely deep dives in the mesopelagic). Then, when the sun rises again, they swim back to the deep ocean. This phenomenon is called diel vertical migration and is  the largest animal migrations on Earth, and it happens twice a day! Even if it involves “only” displacements of hundreds of meters, it is experienced by small (of a thumb-size and less) animals. I will never complain about my commute again.

Very little is known about this “world” and its interaction with the ocean epipelagic. What are mesopelagic organisms eating exactly? And how much? What do they do during the day? What triggers their migrations (likely light, as in sun-up, sun-down)? How does their movement affect the cycles of different elements (especially carbon, the building blocks of life)? How are they affected by the variability in the ocean conditions at the surface? Are they distributed in the same way in different regions in the ocean? There is a lot of work to do!

During the NAAMES research voyage we are trying to learn something about the mesopelagic in the North Atlantic in different ways. Every time the ship slows down to ~ 4 knots, we put in the water our acoustic system: the echosounder. The idea is similar to the one behind a fancy fish finder, a sonar or the way bats find their dinner: our instrument sends sound towards the deep ocean and some of the signal is reflected by surfaces with different density (for example fish bladders). By measuring the time between when the sound is sent and when it is received back and the intensity of the reflected signal, we can estimate how much “stuff” is at which depth. We do that at different frequencies so that we can describe the distribution of organisms of different sizes, but unfortunately we cannot visually “see” what’s there.

An example of the output from the echosounder from NAAMES 2 (May 2016). The x-axis shows time (in particular, the time of the day) and the y-axis shows depth. Different colors refer to the intensity of the reflected signal from different depths (i.e. red and yellow mean that there is a lot of “backscatterers”/ stuff that reflects sound, white that there is very little / nothing and blue and green represent intermediate values. This plot shows the output of the echosounder for 2 days and it’s possible to see the vertical migration of some mesopelagic organisms at sunset and sunrise.

Another tool we use to explore the mesopelagic is a net. At each station, we have a look at our echosounder and we decide at which depth we will tow our net. SSSG and crew members team up with us to put our big net at the right depth and drive the winch to tow it for a time between 40 minutes and 2 hours. When the net is brought back up to the surface it is hard not to be excited: the net is coming from the mesopelagic and we could find anything in there! After taking out our “catch” and rinsing the gear (that tends to be vaguely stinky for a while), it’s time to look at what we got: according to the location and the “layer” we targeted, so far we got a good selection of shrimp-like crustaceans, jelly-like zooplankton and a good collection of mesopelagic fish. 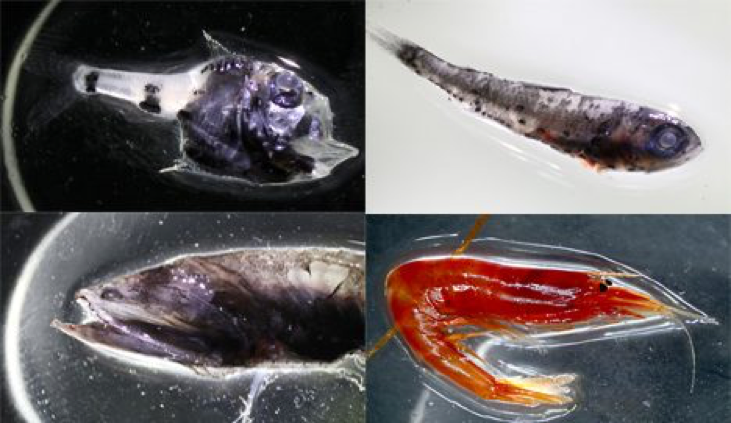 Examples of mesopelagic fish and zooplankton from our net tow.
(1- Hatchetfish, 2- Myctophid, 3- Bristlemouth, 4- A crustacean).
Photos by Stuart Halewood

It will be definitely fun and interesting to compare the results from our net-tow from different stations, with patterns in the echosounder and with the results of the “imaging team” that are taking snapshots of zooplankton at different depths during the water sampling sessions.